Noted Västernorr citizen and business owner, Sid Jackaldoom owns Västernorr’s most famous inn, restaurant, and mechanical repair shop, Sid’s Gas, Grub, and Grotto. His inn keeps him busier than a one-armed paper hanger, because he’s not only a skilled mechanic, but a damned good cook, and he frequently takes on both responsibilities.

Every indication is that Sid used to be an adventurer before he retired and settled down; those who know him at all suggest that he was some manner of mechanical whiz, colloquially known as a Grease Monkey (darker rumors also suggest that he took a deal with the Devil to reach the pinnacle of engineering).

These days, Sid’s life is comparatively quieter. His daughter, Jasmine, plays in the house band, Empress Uzerekid Wormwarper’s Mummy Rot. Few are insensitive enough to ask what became of Mrs. Jackaldoom, or how he lost the arm. 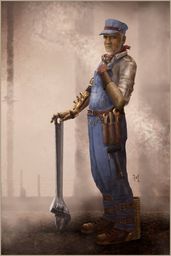