The public face of Lord Vau, the false Lord Vau was some manner of wasteland mutant. He exhibited the power of telepathy, and appeared to have some manner of grossly obese left leg, prompting him to encase the appendage in a wheeled metal canister.

The false Lord Vau also apparently engaged in experiments with arcane drowtech, suggesting that he sent some of Lord Vau’s slaves to pilfer old drow ruins, such as those found in the Phobetor.

The false Lord Vau died at the hands of adventurers seeking to liberate the slaves in his tower. 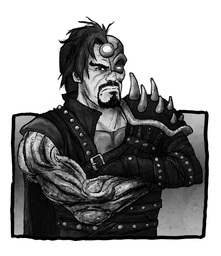